If you have visited the library over the last couple weeks, you may have noticed a bit more color on our rear facade!

Local artist John Michael Hollingworth, a.k.a. Jonny Mike, has completed his new mural, titled Summer of Love. The mural is part of the Patchogue Arts Council’s Summer of Love 1967 – 2017, a summer-long festival commemorating the original happening. It also serves as a backdrop for the organization’s Arts on Terry Street, happening this Sunday from 12 – 6 PM. The day-long, family-friendly, street fair features pop-up exhibitions, artist demos, live music, and much more. 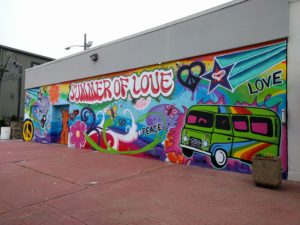 The temporary mural adorns the back wall of the library and is up now through September 3. It celebrates the 50th anniversary of the Summer of Love, a cultural revolution where over 100,000 flower children gathered in San Francisco. Once there, they spread their counter-culture movement, which embraced the themes of peace, love, psychedelia, and Zen philosophy.

The mural is bright, colorful, and beautiful. Using Flame BLUE acrylic paints that span the colors of the rainbow, Hollingworth began with round back colors before adding the main graphical details. All the call-backs to the flower-power movement are here. Hearts, peace-signs, and flowers are all prominently featured alongside the words ‘peace’ and ‘love.’ There is even a bell-bottom girl, and Volkswagen bus! When interviewed by Tara Smith for the Long Island Advance, Hollingworth mentioned the mural is the largest he has created. He also said he enjoyed it when people stopped by to admire the mural as he worked on it. It is a celebration of art and music. 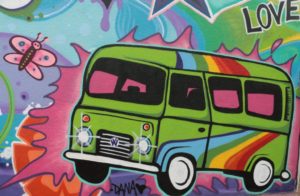 John Hollingworth is a photographer and graphic artist from Patchogue, NY. He began his creative career in the early 1990’s with a black book and some pens. He is fascinated by subway art and the graffiti scene on Long Island. Hollingworth loves to explore and uses his camera to capture the abandon ruins of dilapidated buildings. His photography brings a new-found appreciation for abandoned buildings and preserves a bit of history. His artwork has been exhibited in galleries across Long Island.

The Summer of Love Mural, created by John Hollingworth, is on the rear of the Patchogue-Medford Library now through September 3, 2017