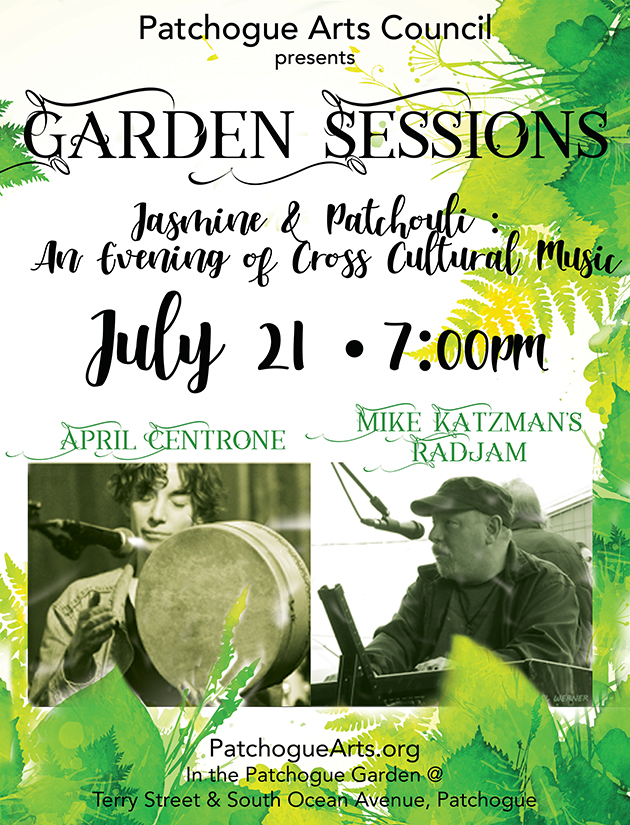 With an inaugural event on July 21, PAC unveils an exciting new program. In the spirit of E Pluribus Unum, PAC Garden Sessions will pair a group of musicians from the world music genre and a band with local popular appeal. In an evening of synergy, musical explorers will be introduced to the local scene and local fans might have a first experience of a new sound. April Centrone is an accomplished percussionist performing in multiple genres including jazz, rock experimental, and world music. She became enamored with Arabic music in 2005 when she studied with Lebanese/Palestinian percussionist Michel Baklouk Merhej. In 2007 she co-founded the New York Arabic Orchestra. She has performed internationally with renowned Arab artists such as Ziad Rahbani, Marcel Khalife, Bassam Saba and Charbel Rouhana. Her passion for Arabic music led her to co-found the Arabic music and language project مشروع جذور لبنان Project Roots Lebanon, serving the youth of refugee camps and underprivileged zones throughout Lebanon. She has served as teaching artist/consultant for Yo-Yo Ma’s Silk Road Connect and was lead teaching artist for Musicians For Harmony’s Music of the World, introducing inner-city youth to native musicians from Africa, Asia, Arab World and Latin America. Currently, Centrone leads New York and Beirut-based women’s and mixed groups in percussion, ‘ud, and meditative/trance drumming. Keyboardist Mike Katzman has been a stalwart member of the Long Island jam scene for thirty years. He currently leads the popular Jellyband and is a member of The Electrix, Rusty String Band as well as sitting in with others from the east end to Manhattan and beyond. Mike has assembled for this performance a group of musicians that he has played with in various bands over the past three decades. Drummer Russell Stedman and bassist Jim Fontana (also of Jellyband) first played with Katzman in Reckoning almost twenty years ago. Mike has a thirty-year history with Dave Berg (guitar) and Amy Peters (mandolin) in Sea Cliff centered Rusty String Band. He can also be found sitting in with vocalist Amy Stahlin of the east end’s Roses Grove. With decades of experience jamming together, this band will take you on musical journeys through the songbooks of the Beatles, Rolling Stones, Jefferson Airplane, The Band and the Grateful Dead. Garden Sessions will sure to excite the musical adventurer in us all!